These are interesting times.  Last week, I attended the Digital Pedagogy Institute at the University of Mary Washington in Fredricksburg, Virginia.  Attending this institute was re-energizing and interesting since I conversed with many higher education colleagues looking to change how online learning is delivered and transform what it can provide to student learning.  My discussions with my new friends and colleagues from around the nation allowed me to reflect on why I teach and what I hope my students gain from the knowledge we share in the online classroom environment.

At the end of the week, refreshed from my knowledge, my SHSU colleagues and I who attended the institute were reminded of the problems that have always been a part of U.S. history.  Just 66 miles down the road in Charlottesville, hatred and bigotry was in full display for all the world to see.  The discussions shared during our trip back was filled with anger, disappointment, and in very blunt terms, validation that all is not good in our nation when it comes to diversity concerns.  For me, the images of [tiki] torches held by adults, young and old, marching through the campus of a highly esteemed university were surreal.  The pictures I viewed on my smartphone that morning after were not only disturbing, but real and raw.  In my initial reactions, I felt numb.  You only see pictures like the ones you saw in history books, not in today’s newspapers.  It was happening.  Torches lit not to provide light for a march, but lit to intimidate and to remind all of us of our nation’s ugly racist past.  However, the individuals holding the torches were not hidden, they were for everyone to see.  What was once a secretive action by community members was now out in the open for everyone to see.

In the aftermath of the march and tragic death of Heather Heyer, we as a nation are still trying to make sense of everything that has and is occurring.  As of today, I believe the nation is trying to figure out what direction we are going.  Within these discussions are questions on leadership.  This posting isn’t going to address any person by name, but it will address how leaders respond to imagery and actions connected to Charlottesville and incidents of a similar and lesser nature.

The word “moral” in this posting is placed in parentheses on purpose.  Leadership involves much more than achieving goals.  In my teaching of leadership theory and concepts at both the master’s and doctoral level, the resources I used for class frequently addressed the avoidance of coercive leadership usually held by authoritarian individuals.  In my most recent teaching of the leadership course for doctoral students, I used Juana Bordas’ (2012) book Salsa, Soul, and Spirit: Leadership for a Multicultural Age.  In the book, Bordas beautifully described different perspectives of leadership formed by cultural experiences and ideas.  In using the book, my students appreciated most, if not all, of the leadership knowledge provided by Bordas.  Among the most frequently discussed were the ideas of being a “leader among equals” and looking at leadership through a “we rather than I” lens.  Key to these two characteristics is the thought of how leadership impacts not just your organization, but the surrounding community and values of everyone affected by your organization’s actions.  Deeply embedded in Bordas’ teachings is the moral responsibility of being a leader.

I would add that being a leader is not always associated with a holding a top-level position.  Being a good leader also is reflective of what you value and what you hold close to your heart with regards to impact of your own actions and most importantly, the actions of your organization. 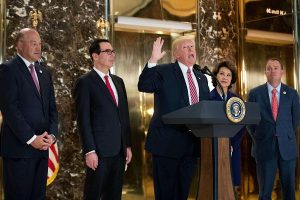 The above image is from CNBC.com is interesting to me when I view it.  As of this morning, there are many viewpoints and opinions being stated on how our current president responded to Charlottesville.  I personally deeply disagree with how this person views this national tragedy.  However, with regards to what I believe is moral leadership, those individuals standing to the side of the person speaking is the most important focus of the picture.  Moral leadership, I feel, is being tested at that moment.  There is no denying that individuals blazingly displaying Nazi flags and chanting nationalist slogans have no place in our democratic society.  So, with that simple knowledge, what made these individuals politely stay still and silent?  I wonder what was going through their minds as statements giving 50/50 blame on actions were being stated by their leader?  They just stood there.

(Moral) leadership.  I would like to think that all the individuals in the above picture are indeed moral individuals.  Morality is not necessarily something you tell others verbally on a daily basis, you show morality through your actions.  What you do and how you do it lets others understand your level of making sound and responsible decisions.  At times, your morality is tested.  When it is, you might often speak up or leave the presence of what you feel is immoral.

This summer, I attended a concert by Roger Waters, from the band Pink Floyd.  I grew up listening to Pink Floyd’s “The Wall” and appreciate the music of the band.  Anyone who is a fan of Mr. Waters knows that he wears his heart on his sleeve and doesn’t hold back on his views of politics and society.  Prior to attending his current “Us vs. Them” tour, I knew that one portion of his concert (interestingly enough during the classic “Pigs (Three Different Ones)”), he was going to let the audience how he personally feels about the current presidential administration.  I will be honest, he didn’t hold back any punches.  It was blunt, straightforward, and at the end of the song, a message so powerful that even I was aghast.  Knowing that I live in a red state, I was curious how the crowd would react.  While I guess that a majority of the audience responded to the messages and images with applause and cheers, I noticed some visibly in disagreement, leaving their seats making their way straight to the exits.  Their disapproval was shown by their own actions and I would guess that while many did agree with this part of the show, for those people who left, their values were challenged and they acted.  They (for what I could see) politely left.  So be it (and they missed a hell of a closing set!).

Going back to the image, I am struck on the different reactions to the press conference.  As of today, some reports state that some in the administration were uncomfortable, surprised, and flabbergasted.  However, my moral self would like to think that if I was in the same room or standing next to the individual, would I act in response to someone I call my leader?  Would my morality have more weight than my affiliation to a party of individual?  Would I visibly react (like my Roger Waters concert goers) or would I just accept it and move on?  I placed (moral) in parentheses because I believe for many of us, we consider ourselves moral but for some, we might find it convenient to hide it within a small space only to make visible when interestingly, no one cares to notice. That is what happened at the Roger Waters concert.  Folks left knowing that others were still enjoying the show.

Morality is still a concept that I am learning.  I go to Mass and try my best to learn how to become a moral person.  I do my best to read what others state on how to live a moral life (right now I’m reading The Book of Joy to learn from the Dalai Lama and Rev. Desmond Tutu).  In my actions as a faculty member, I try to do good and even when I have a challenging student, I show empathy to do my best to understand why that person is finding my course difficult.  Being a moral individual requires effort and constant reflection.  However, sometimes morality tests you to respond quickly and immediately.  I find that aspect fascinating and frightening.  How would I act as a moral leader?

To this day, I am still trying to break myself from being a (moral) leader to becoming a truly and fully moral leader.