Yesterday, my wife and I went to the museum to view an exhibition of the creative genius that was Oscar De La Renta.  I am not much into high fashion, I never quite understood the idea of some things that are considered “in style”.  However, I found the exhibit we attended quite amazing and educational!  Much of Mr. De La Renta’s work paid close attention to not how a woman looks like in his dresses, but how a woman *feels* when they put on one of his creations.  According to the audio narration that accompanied the exhibit, De La Renta wanted women to feel comfortable in his tailored clothing and many pieces were described as actually being light and airy with no bulk and heaviness to burden those that wore his works.  Mr. De La Renta was described as someone who valued women and whatever role they were in when they wore his dresses.  Many of the pieces on display were noted for who wore them – celebrities, political figures, art patrons, and socialites.  One piece in particular stuck out for me, not for the designer but for how the person viewed Mr. De La Renta.  One outfit was described by a Houston socialite who apparently had a close relationship with the designer.  The socialite is a big name in Houston society.  However, something she said in her narrative struck me as odd.

While describing the greatness of De La Renta, the socialite had to add in her story that he was “quite the Latin charmer” which was followed by a burst of laughter.  Ah yes, the Latin lover image where respect and attention to women by Latino men is equated to the “latin lover” charmer caricature.  After all I heard throughout the exhibit on how De La Renta, a gentleman of Dominican Republic descent,  respected the women who wore his dresses, the statement which came in the last space in the exhibit had to be made.  I know that I might be a bit sensitive to the comment but I was truly impressed by the works on this Latino genius in the fashion world.  In a way, my thoughts of how others really come to respect and honor this man kind of got diminished in that others listening to the narration might have a little giggle and be put back into the world of how Latino men are viewed.  I was disappointed to leave the exhibit with this thought.

It reminded me that this is the U.S. , where we are often surrounded by casual reminders that diverse groups have their “place”, or at least their perceptions that others hold.  Despite that subtle reminder in the exhibit, we continued on into the museum.  Thanks to one of my close friends, we were recommended to check out another exhibition titled “HOME”, where several contemporary Latinx artists created pieces of art depicting their views of “home”.  It was another great exhibit.  One piece in particular hit me emotionally in its subtle message of what home is for many Latinx individuals.  The piece was a series of paintings by the San Antonio artist Vincent Valdez.

The art was titled “Excerpts for John”, a friend of the artist who suffered from PTSD and unfortunately committed suicide.  The artist powerfully depicted his friend returning home in an imagined series of paintings where his friend’s flag-drapped casket is being led away from the military cemetery where he’s buried to return to his home, a simple one-story wooden house that looked almost like my Grandma Inez’ house.  The procession with full military honor guard goes through what looks like the barrio.  The image where the casket passes the supermarket got me for some reason.  I think it was because that market is something most Mexican Americans in Texas have seen and visited, especially during the holidays.  Who hasn’t gone with their parents to buy ingredients for tamales, menudo, and if you’re lucky, some pan dulce to eat on the way home?  The artists’ ability to capture that moment at least for this patron was amazing.  To see the painting end with his friend returning “home” with his casket now facing the front porch was beautiful and sad.  I would recommend that you visit the artist’s section of his website to view this great piece of Texas art  http://www.vincentvaldezart.com/work/excerpts-for-john/1

How we view “home” in the U.S. gets taken for granted, I think.  I’ve always seen myself as extremely fortunate that I still get to visit my Mom in the house where I grew up.  I can also say that in my lifetime, my parent’s never moved from that same house.  The neighborhood that I visit is still the same neighborhood I rode my bike and walked to elementary school.  I think that is special.  For me, “home” is more than a structure, it is a space where I know I feel at ease, where I feel connection, and most importantly, I feel some sense of identity.  Home with all its comforts also provides challenges.  In my home space, I encountered racism and discrimination at an early age.  I was called “beaner” “wetback” and other terms despite being born in that space.  I was bullied for being just me: a chubby Mexican American kid who was dealing with other challenges personally.  Sure, I had friends but I also had individuals who made life miserable for me.  It was rough, but despite that, my home is what it is and I learned a great deal from these experiences.

Back at the museum, I was given another reminder of having a home here in the U.S.  As a Mexican American who lives proudly in Texas and loves his cultural heritage and identity, I found my introspective self continuing to analyze the surroundings at the museum.  In a large gallery, I noticed there was a huge installation with a video projected onto the wall.  I’ll confess, I didn’t make my way down to the gallery to learn more about the piece of art, but what I did see was the videos had pictures of monuments marking the southern border of the U.S.  Various images showed how these monuments are represented in marking the border.  From my vantage point, I saw something different.  With the “Latin charmer” comment on Oscar De La Renta made by the Houston socialite, to the imagined homecoming of a soldier friend through a San Antonio barrio, to my own reflections of what “home” meant for me, I saw the art installation in the gallery below of representing the U.S. – where home can be an interesting conflict of success, barriers, sadness, beauty, stereotyping, and respect. 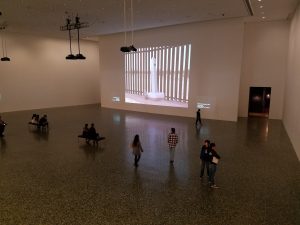 I looked down at the people below me and wondered, do they really understand the message the art is expressing?  For many, a border (and not just a physical geographical one) is a daily part of life.  Living in the U.S. is a challenging one, yet it is also one that provides many rewards and opportunities.  I have found balance in living in this country.  However, the balance can be a bit tricky to keep centered but still I find ways to keep it where I would like it to be and to adjust when possible.  It requires thought and like the like the pieces of art I viewed, interaction.  The Latinx artistic minds I saw yesterday gave me a much needed opportunity to reflect on this important fact.

Today is the last day of 2017.  This year was odd.  Yes, Houston had its challenges and personally, I had mine.  Despite this, another year awaits and what is ahead is yet to be seen.   I think this fueled my intense thinking at the museum.  I want to continue to be a curious, introspective mind and be the observant person I’ve always been.  2018 will hold good changes, I feel it.

I am surrounded by a great deal of love.  Blah! Sappy statement, I know, but a recent Facebook posting about my Zodiac forecast (I’m a Cancer) told me to just let love rule.  I’m going to take more care of myself (physically and mentally) and I’m going to remind myself of those who support me in all my endeavors.  Reflecting on the past year, I have made a great deal of great friends.  I know some that will be lifelong friends and that is amazing when you think about it.  I hope to return all the good that those folx provide to me and to help them in their goals as well.  Of course, I cannot forget my family and loved ones.  These individuals are my reason for being.  In 2018, I will make sure to let them know how much they mean to me.  2018 will be a good year.  Why? Because I am home. 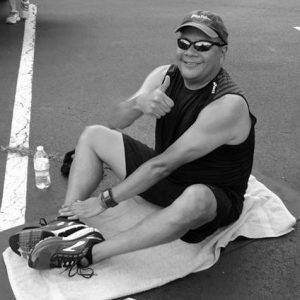