I am 49 years old and I have never had to say “goodbye” to a close friend.  That is until yesterday.

Sunday was a National Day of Prayer and in my own private way, I paid attention to the meaning of the day and went to Mass.  I said prayers of thanks for our safety after tropical storm Harvey and thanks for the family and friends who checked in on us throughout the storm.  Deep inside my mind, I was always worried about a friend who was in dire need of prayers of healing.  The night before on Facebook, a message from his wife asked for such because her husband, my friend, was dealing with a serious medical crisis.

On Sunday afternoon, as I was about to do some work for my online courses, one of my colleagues texted me.  “Erik has passed away.”

I didn’t know how to react.  I was in shock and one of my first reactions was to call my colleague who texted me.  I guess I did it to just get an answer that the text truly was real.  I also checked Facebook to see the news.  Unfortunately, it was real.

I really didn’t express my emotions until I saw my wife.  Once I saw her, I broke down in tears.  My friend was gone.

Erik M. Colon was truly a one in a million.  His demeanor was all about caring for others.  He was like a big teddy bear.  Even the most macho of men would just break into a smile after meeting Erik.  He was a big guy with a bigger heart.  I was always amazed at how he could immediately make friends with total strangers.  I was even more amazed on how great of a salsa dancer he was.  I was jealous.  He knew all the moves and could break into a rhythm in a quick minute.  Like I said, the guy was truly amazing. 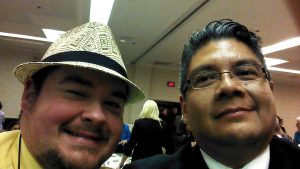 He was a loyal friend.

I will miss my “mijo” Erik.  Despite him not being on this living Earth, I know he will always be remembered in our little big family within the ACPA Latinx Network.  We will likely cry at our next meeting, but we will also laugh and likely we will also salsa dance.  Erik would like that.  We’ll make sure that will happen.

And when it does, we’ll wear our fedoras.